David came to the Power Stuttering Center in Newport Beach, California from Uruguay in the summer. He was the CEO of a large software company in South America and also a person who stuttered.

He had seen certain stuttering treatment results reported by scientific research journals. These journals stated that “prolonged speech programs” were the most effective treatments for adults and teenagers who stutter. This turned out to be true for David and many others.

The fact that David took the time to review scientific research articles is impressive. Well-respected speech scientists peer review these journals. They check the validity and reliability of the results claimed by the researcher who submits the article. If the experimental study does not pass the peer review scientific standards, it is rejected.

Many times the experts on the journal staff will decide to require the researcher to make specific changes. They then adjust the paper and submit it again for approval.

David became the ideal patient once convinced of the effectiveness of the treatment programs. He was very motivated to change his speech and replace his stuttering with a new way of talking. We conducted much of the treatment in his native language since David spoke Spanish more than English.

When David went back home he said that he “felt like a different person”. Before treatment, he used to avoid many speaking situations. For example, he didn’t really have to engage in conversations with those around him if he thought that he might stutter – so he kept quiet.

After treatment, he reported that he enjoyed starting up conversations with other people on the street, on buses, and at scientific conventions. As a result, he made many new friends, He established new relationships with colleagues at professional gatherings. His whole life did change because of his stuttering treatment results. 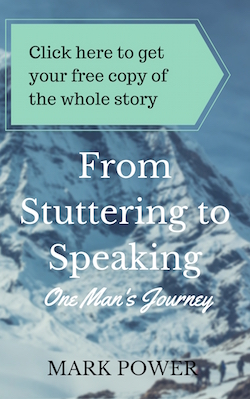